May 17th, 2013
Central Texas water fight could have statewide implications

Interactive: How deep is the Simsboro?

The Lost Pines Groundwater Conservation District on Wednesday heard from a coalition of residents and businesses opposed to new water permitting. The dispute, some say, foreshadows fights the rest of the state will face in the future. Read the full story at StateImpact Texas.

It’s easy to understand why Rick Knall would be nervous with outside businesses taking water from his neck of the woods. Knall is a property owner in Bastrop County who relies on his well.

“Our well has been a godsend it has been pumping strong good clean fresh water for a number of years,” he said at a hearing of the Lost Pines Groundwater Conservation District last night.

Like many others at the hearing, he worried that that steady supply could dry up with more straws in the ground. But the question of whether the Lost Pines Groundwater Conservation District would move ahead granting new permits had resonance beyond this Central Texas community.

“I think the whole state will be watching this,” Steve Box, with Environmental Stewardship, told StateImpact Texas ahead of the hearing.

His group opposes the permits. He and others saw the hearing as a sort of test case for the role of local groundwater districts.

Box says groundwater districts are mandated to issue water permits as long as they don’t interfere with district goals for aquifer levels called “desired future conditions.” But what if the permits are granted, the water is pumped, and the drought further depletes the aquifer?

Box says that possibility alone should give districts authority to withhold the permits.

“Statewide, we have groundwater conservation districts wrestling with this issue of how do they manage with respect to pumping when what they have to do is give or not give permits,” he said.

The district’s final decision to reduce the amount of water two permit applicants could take was a victory for Box. He said it would send a message to other districts that they could conserve water.

But another challenge went unresolved.

That touches on water rights versus property rights. Aqua Water Supply is a private water utility that already pulls water from the district. It opposes the new permits because it thinks they may endanger its investment.

“Our position is that the district has the statutory mandate to protect our existing uses,” said Michael Gershon, a lawyer working for Aqua Water Supply.

That case will now go before the State Office of Administrative Hearings. Where water marketer End Op will argue that it has every right to take H2o from what looks like an ample supply around Bastrop, to feed a growing demand the in suburban Austin. 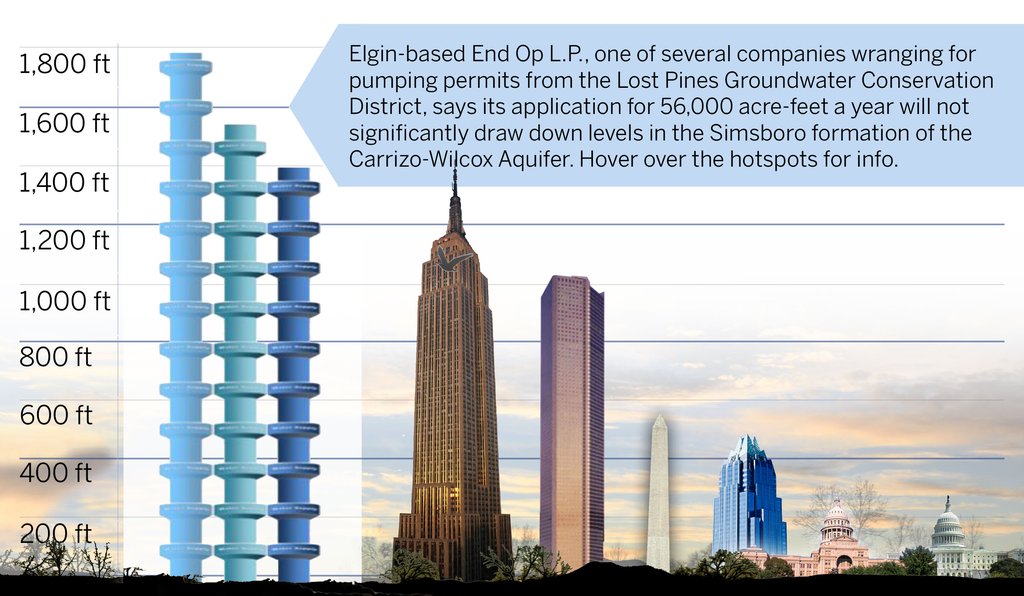 MOSE BUCHELE reports for KUT News where this story was originally broadcast. It is made available here through a news partnership between the Texas Tribune and the San Marcos Mercury.

One thought on “Central Texas water fight could have statewide implications”